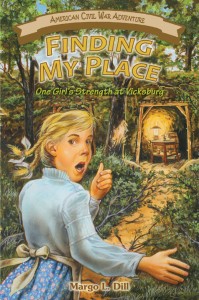 Cover for Finding My Place by Margo Dill

I’m excited to introduce to you middle grade author Margo Dill. Her historical middle grade novel Finding My Place was published by White Mane Kids this past October. In addition, she also has a picture book accepted by Guardian Angel Publishing and another by High Hill Press. She is also the memoir editor for High Hill Press. When she’s not writing, she loves spending time with her husband, stepson, daughter, and dog—Chester, a boxer.

When I first met Margo, she was introduced to me as the only other writer in the room who also wrote children’s literature. Since then we’ve become critique partners. However, I have never read pages from Finding My Place. Instead, I read it like everyone else as a reader, and I loved it.

Finding My Place tells the story of 13-year-old Anna Green who lives in Vicksburg, Mississippi during the Civil War. For 47 days in May, June, and July 1863, the Union army bombs Vicksburg day and night, attempting to overtake the city. Anna longs for the days before Yankee bombs screeched above her, before her family was torn apart, and before they moved to a dark, damp cave to protect themselves from falling shells. During one terrible bombing, a tragedy strikes Anna and her siblings and changes their lives forever.

To get us started, Margo, why did you want to tell this story?

Margo: I thought the courage and perseverance of the people of Vicksburg was amazing—they lived in caves with minimal supplies for 47 days in the summer of 1863 in the South. As a teacher, I also knew most of the resources for children are told from a northern point of view and from the view of the soldiers or a child solider (or drummer). I think it is important for children to know all sides of an issue—not everyone in the South was “evil.”

That’s a good point. What other historically accurate details did you choose to incorporate into your setting for Finding My Place?

Margo:  Besides the reasons I said above, I got the idea while teaching fifth grade social studies and reading one paragraph in the social studies book about the Battle of Vicksburg. I was amazed that I had never really heard much about it and wanted to find out more. When I heard people ate rats, printed their news on the back of wallpaper when they ran out of paper, and lived in caves to keep their city from falling into the hands of the “enemy,” I thought it was the perfect setting for an intriguing story.

What was the hardest part about writing Anna’s story?

Margo:  I think imagining what it must have been like for a 13-year-old girl to deal with such adult problems and issues, but still make the book for kids. I know that the Civil War is covered in 5th/6th grade in most places and home schools, and so I wanted to write it at that level. But war is awful, and so I had a lot of issues with trying to get the war to an acceptable level for children and still be realistic.

Seeing as I have three siblings, I really enjoyed how realalistic James, Anna and Sara’s relationship was. Did you have siblings growing up or do you have children in your life who inspired their characters?

Margo: No siblings—I am always asked that question! I think it was just from my experience as an elementary school teacher or maybe from reading or just observing kids. I don’t know exactly where it came from; but it came out, and I’m glad it’s somewhat realistic. 🙂

Who would like reading your book? The people who have read it, what are they saying they liked about it?

Margo:  It seems as though adults and children are both enjoying my book—so that’s nice. Teachers have been reading my book to their classes, and one student wanted to know if they could keep reading instead of going on to the next subject. Another teacher recommended it be in the nominations for the Mark Twain award. I think people like the characters the best—Anna, James, and Sara. They also like (or hate!) the antagonist, Mrs. Franklin. They also like that it is a realistic and accurate look at the Battle of Vicksburg. Some people have said it was a real page-turner!

Can you talk about some of the historically accurate details you woven throughout the story? For example, did the residents of Vicksburg really live in caves in their backyards?

Margo: Yes, they really did. The yellow clay hills were perfect for the slaves to quickly dig out caves, secure them with some boards across the top and on the bottom for a floor and to run to when the shells started to drop. It is true that people used all the substitutions I mentioned because Grant was stopping any supplies from getting to Vicksburg—so people used acorns for coffee, sassafras for tea, berry juice for ink, and so on. There was a fire downtown at the General Store during the Siege, and the soldiers really did stop shelling three times a day to eat breakfast, lunch, and dinner!

That’s crazy. I would have never thought acorns could be substituted for coffee. That seems like a lot of specifics. So, what did your research involve to make sure your details and facts were historically accurate?

Margo:  I went to Vicksburg in September of 2001, a few days after 9/11. I was supposed to fly, but instead I rented a car and drove down to do research. I toured homes that were standing during the Siege, and saw a shell still stuck in a doorframe in one house. I talked to historians in museums. I went to the battlefield which is now a National Park and memorial. I read diaries of women who were alive during the Siege. I also went to the library and went through their vertical files.

For writers, what are some tips and advice you’d tell them about researching a novel like Finding My Place?

Margo:  No matter if you are writing for children or adults, you have to do your research. You have to know details of everyday life as well as the event you are writing about. Find people who know your time period and ask them to read your manuscript and tell you what doesn’t fit. Research a lot, then start writing, and then fill in the holes that come up when you are writing your story. And always focus on the story while writing—put research details in where they fit with the STORY!

Thanks for satisfying my curiosity about your research process, Margo. Do you have anything else to add?

Margo:  Well, since I am so thankful for you and the other Lit Ladies (our critique group!), I want to say that a critique group is invaluable. This novel actually went through two critique groups because I moved while still working on it—Thursday Writers in St. Peters/O’Fallon and Columbia Novels Group in Columbia, MO. Without going to critique groups and learning about the writing craft at conferences, I would not have gotten my novel published. If you are a writer and not in a critique group, try to find one. It will be the best thing you ever do!

In addition to being a children’s author, Margo L. Dill is a freelance writer, editor, and teacher, based in St. Louis, Missouri. Her work has appeared in publications such as Grit, Pockets, Missouri Life, ByLine Magazine, The Chicago Tribune, True Love, On the Line, Fun for Kidz, and The News-Gazette. She is a columnist, instructor, and contributing editor for WOW! Women On Writing. She writes weekly book reviews for The News-Gazette (Champaign, IL).

Learn more about Margo and Finding My Place by visiting http://www.margodill.com or her Facebook Fan Page where she posts about reading, writing, grammar, her books, photos from her school visits and pictures kids have made her and more. She is also on twitter @Margo_L_Dill and tweets for WOW! Women on Writing @womenonwriting.