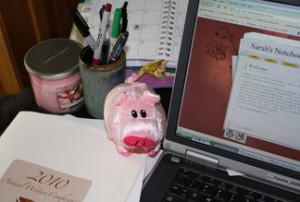 Miss Jo takes her place on my writing desk.

I was minding my own business when the pig fell in my lap.

Okay, maybe it didn’t quite happen like that, but that’s about how I felt. Over the weekend, I attended The Missouri Writers’ Guild 2010 Annual Writers’ Conference at The Chesterfield Drury Plaza Hotel. It’s an annual conference where Missouri writers can network and become inspired.

Before a mystery-writing panel featuring authors Jo Hiestand, Judy Morsi and Esther Luttrell, Jo decided to give away a door prize. She gathered the ten or so people who’d filtered into the room together, then turned her back to us. Her plan was to throw a pink bean-bag pig like she was a bride throwing a bouquet. Who ever caught it would win a second pig, ink pen and coffee cup.

Being a writer, I can never have too many ink pens or coffee mugs. I wanted to win, but knew it was impossible because this pig toss would probably play out like the one on Friday did, when the person sitting next to me caught the pig Esther threw into a crowded room during her workshop session.

Sitting in the second row and surrounded by about nine others, who were more likely to catch this pig, I instead got to the very important business of worrying about my upcoming pitch to Suzie Townsend, junior agent with Peter Rubie Agency. Earlier, I’d pitched Joanna Stampfel-Volpe, agent with Nancy Coffrey Literary and Media Representation, and…well…uh…kinda….stuttered through. (She was very nice.)

I could be braver with Suzie, I just knew it!

While I tackled bad daydreams, Jo’s arm flew up. The pig, instead of traveling in a tidy arc above my head, followed a straight trajectory past the person in front of me, and bounced off my arm and into my lap. Jo hadn’t delicately tossed a bouquet, she’d launched a missile. Of the pink, four-legged variety.

Ten minutes later, I sat in front of Suzie, my butterflies replaced by a smile. The part of me that’s a worry wart was to busy laughing at that silly pig flying through the air to be nervous. The comical image kept the butterflies calm until I pitched to Kristin Nelson, agent with Nelson Literary Agency.

Now, the second pig – named Miss Jo – sits in a place of honor on my writing desk, a talisman against nerves and doubt as I work to get my manuscript ready to send to all three agents. Woot! Thanks, Jo! And thanks to everyone who made the weekend such a great success.

3 thoughts on “When pigs fly”