I’m pleased to bring you my first author interview. Chris DiGiuseppi and Mike Force are the co-authors of The Light Bringer, a supernatural suspense novel that debuted earlier this month. Since then, it has been selling like crazy on Amazon.com and BN.com.

In the interest of full-disclosure, this is not the first time I have interviewed these men. They work on the police force in a Missouri town where, as a reporter, I worked the police beat. I’ve interviewed Chris on multiple occasions, for several stories including a 2-hour police chase, a UFO sighting and a shoplifting feature. In addition, they are members of the Missouri Writers Guild, of which I am the publicity chair.

While you won’t find any UFO sightings in their debut book The Light Bringer, it does have a supernatural element, in addition to being based on their real life experiences from working on the force.

To get us started, Chris, could you explain to us what The Light Bringer is all about? 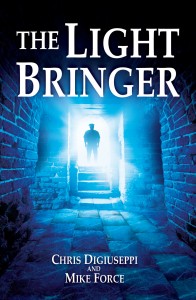 MF & CD: The Light Bringer is a full length novel of supernatural suspense fiction that revolves around the deaths of 16 different people.  The main character is a police sergeant recruited by a federal agency to assist with the families who’ve lost loved ones.  As he delves into his assignments, he finds that his duties take him beyond life itself where good and evil conflict.  The story encompasses the mysteries of death and focuses on the question of “why do people die?”

What kind of research did you do when you were writing the book? Because you were both cops, did you have much research to do?

MF & CD: The first half of the book incorporates incidents based on real events which we took from our personal and professional lives.  Many of the procedures involving police protocol and technical aspects of law enforcement came with very little research as we are familiar with such.  The later portions of the book involve supernatural elements derived from research we did involving varying beliefs, religions and historical accounts, to include aspects of Greek and Norse mythology.

What was the writing process like with a co-author?

MF & CD: Writing with a co-author could be a challenging process but as both of us have worked together for many years and share very similar values, the process was easy.  It enhanced the book because we had the opportunity to bounce concepts, thoughts and creative ideas off each other from a variety of different angles.

How did you two come up with the idea?

MF & CD: We talked for many years about writing something that revolved around the numerous tragic situations that we’ve seen over the course of our careers.  The idea evolved as we continued to talk about how we could create a story from these events which would stimulate thought on following the right path in life, along with sending a message of hope and inspiration.  The end product produced a work of fiction combined with some real life experiences.

What do you hope readers will take away from The Light Bringer?

MF & CD: Although it is a work of supernatural fiction it’s our sincere wish that the story will inspire hope in those who live with despair from the tragedy of death and loss.  The message we want to project is that the length and difficulty of the walk we take after we leave this earth is reflective of the way in which we’ve live our life.  Many people have made mistakes in their life that they feel are unforgivable; however the message in our book portrays that it’s never too late to change.

What does your editing process look like? Did you go through many drafts?

MF & CD: As first time authors the editing process was long, tedious and at times frustrating.  We started with a chapter by chapter edit focusing on characterization and flow.  Next we progressed to removing extraneous content and then onto fine tuning smaller details.  The edits involved going over the manuscript numerous times.  Our literary agent was extremely thorough and a perfectionist, but in the end we appreciated the many edits as it was an excellent learning experience that led to publication. When it was presented to the publisher the senior editor complimented us on how well polished it was.

MF & CD: Our inspiration stemmed from those situations which weighed heavy on our souls.  Seeing people in extreme pain and grief from losing their mothers, fathers, brothers, sisters or children drove us to try to make sense of those tragedies and attempt to form answers in our own minds – even if those answers were fictional.

What literary character do you relate to the best?

MF & CD: Our main character is a police sergeant who was created through combining personalities, backgrounds and values that are reflective of our own.  His greatest attributes are his compassion and ability to empathize with others.

Many writers describe themselves as “character” or “plot” writers. Which are you?

MF & CD: Although we can relate to many aspects of our main character, our writing style dictates that we’re “plot” oriented as the message of the book far exceeds the importance of the characters.

MF & CD: Some of our annoying writing quirks revolved around the typical types of writing we’ve done as police officers.  It was, at times, difficult to keep the police jargon out of the story whereas it seemed very natural and common to us but out of place to our literary agent.

Other quirks such as the process in which we wrote centered around the development of three documents which included the working copy of our manuscript, a character list and a series of notes pertaining to ideas we didn’t want to forget.  This last document allowed us to develop any portion of the story at any time as those concepts evolved.

What has been one of the most surprising/shocking thing(s) you have learned about yourself or the publishing world on your journey to being published?

MF & CD: We’ve been in many situations that have required courage but didn’t realize how much it would take to go out publicly with a story that displayed our personal feelings and beliefs.  Enduring and persevering through the process of attaining an agent and getting published has taught us many things about ourselves and our lives, most specifically how the good people around us were the real reason to why we succeeded.

As all of our research, referring to the chances of becoming published authors, indicated that we would fail, the people in our lives who cared about us, kept pushing us forward and believed in us, were the ones who defied the odds – not us.

Writing this book has sharpened our awareness of the degree in which we are committed to our values.  Although the saying cliché, we still believe “everything happens for a reason” and as we’ve said many times throughout this endeavor we have discovered that in those moments of despair their often comes great clarity in what to do.

Chris & Mike, as always, it’s a pleasure. Thank you for taking the time to stop by Sarah’s Notebook and tell us about your book. If my readers are interested in learning more about Chris & Mike, I’ve posted their bios below & you can find them and the book at www.thelightbringerbook.com.

Chris has over nineteen years in Law Enforcement at various levels up to and including Assistant Chief of Police. He is a graduate of the FBI National Academy and Northwestern University School of Police Staff Command. He is trained in various aspects of Law Enforcement and holds degrees in Human Resources and Business Administration.  Chris lives with his wife and children in Missouri.

Mike has spent over 30 years in Law Enforcement, the last 19 as a Police Chief Mike has numerous certifications in various areas of law, forensics, investigations and criminology. He is a graduate of the FBI National Academy and served  22 years in the U.S. Marines where he retired as a Captain. He oversaw operations for twenty-seven military installations worldwide.  He holds degrees in Political Science and Human Resources.  Mike lives with his wife in Missouri and has three grown children and a granddaughter.